Catching Up: I am now home. My dad and I left Frisco Colorado Monday morning after the race. 26 hours later we arrived in Stratford and my journey was complete. Rather odd to drive back in 26 hours what took me five complete weeks. Riding back brought so many memories as we passed virtually backwards close to where I had cycled. As you all might know from the Facebook pictures and posts I completed the race successfully getting my fourth Leadville buckle. Oddly enough poor planning at the race and they hadn’t planned enough buckles for the finishers so I just got an IOU. That is why this post is so late, it has been a whirlwind since the race as I had to pack everything up and then get home. I have a couple more posts to complete after this one. If you don’t know much about cycling or racing this one might be the one that either bores you or intrigues you. I will note the parts that were the most important points in the race for me…

I will have a couple more blog posts after this one. First; I’ll answer the most common questions I was asked over the course of the weeks. Second, I wanted to circle back on some thoughts on community that have intrigued me throughout the ride.

The Leadville 100: For those of you who don’t know the Leadville 100 is considered by many to be the toughest mountain bike race in North America. Many would argue and I frankly don’t have an opinion. All I know is you have 12 hours to finish. 103 miles and 10,000 feet of climbing in elevations ranging from 10,152 feet at the start to 12,700 feet at the top of Columbine. I warned my dad about the elevation before he got to Leadville. To put the elevation into perspective the Tour de France climbs Mont Ventoux at an elevation of 6273′ a full 4000′ under where Leadville starts. Dad was noting when I finished the race that it was difficult to walk a block without getting winded. Exactly! I will basically divide the race into thirds since this is how I tackle it mentally on race day. Start to the bottom of Columbine; Columbine up and down; Twin Lakes to the end.

Part One: Start to the bottom of the Columbine climb. This is a very diverse part of the course. My day started well with a normal start and keeping up well with the nutrition. St. Kevin’s climb comes app. 10 k in and is a steep and loose rocky climb. This year I was able to climb it well with no stops but it was slow going as I started the race in the orange corral and a lot of racers are trying to get ahead through this point in the race. Here is how to define Leadville. Up St. Kevin’s, down St. Kevin’s back end, up Sugarloaf, down Powerline, up Columbine, down Columbine, up Powerline, down SugarLoaf, Up St. Kevin’s back end, down St. Kevin’s, race like the dickens to the end.

Coming down Powerline was when I had my first and really only major mechanical and issue of the race. I got cut off by some young fellow descending. To note for you Powerline is a very tricky technical descent. When he cut me off I just followed him and he led me off a four foot rock drop. Note to self. When making the decision to go with flat pedals and crossfit shoes for the race jumps are a little harder. Well, needless to say when he cut me off and I went off the drop my feet became disconnected from my pedals at 30k per hour and when I landed the only thing that stopped was my crotch hitting the seat very very very hard. Hard enough it turns that the seat decided to reposition itself pointing straight up. Here is the thing, I was only one third of the way down a very long technical descent and although I was able to find the pedals again I had to stand for the rest of the time down (20 minutes) with the seat threatening to give me an enema at every bump of which there are many. It would end up taking me two stops and about 10 minutes to get the seat properly situated again when I reached the bottom. I survived what could have been a nasty scare and a splendid crash to be honest. I have seen people crash, break collarbones, broken bikes and people in both training rides and the race. It is one of the hardest parts of this race.

I got through Pipeline aid station and motored onto Twin Lakes where the climb begins to Columbine. I picked up a train of riders behind a strong rider and we streamed through the flats very fast and I just held on for dear life.  I was good for nutrition at this point. I was using TailWind and water with some light whole foods mixed in. At this point everything felt incredible. No issues and I made Twin Lakes in a respectable time. This is where the really hard work of Leadville starts.

Section Two Columbine (My Nemesis): You can see in the elevation profile above that Columbine starts climbing just after 60 kilometres into the race and finishes climbing just after 82 kilometres into the race. That means climbing 20 straight kilometres on gravel to very rocky mining roads and tracks to 12,700′ elevation. It is just a bear. I locked onto a couple about two kilometres into the climb and to be honest just stuck to them. What makes this ascent partly so hard is the leaders are screaming downhill at up to 60k/h while you are climbing and trying to pass others on the way up. This was the first year where I would consistently pass people on this ascent. I passed both riding and walking many people. This climb honestly is where you make or break your race. It is a two plus hour grind regardless of what you do when you have my skillset and my physique. I climb well. Tim Watters calls me ‘the diesel’ in that I just grind the engine in a low gear and keep the wheels turning over and over.

Something started to shift in nutrition on the climb. I was mainly drinking water at this point and couldn’t eat anything but Clif Gels. My mouth was dry and I couldn’t find anything to quench the thirst. Odd, haven’t felt this way ever but all still functioning so I just kept pressing on. I got to the top at app. 5:40 (five hours forty minutes) and started the very fast very rocky bumpy descent. All stayed together to the bottom (Twin Lakes) and I loaded up with water. The weather has turned downright hot! I was wearing a wool undershirt and my dress shirt at this point with arm warmers pressed down on the wrists (you can see this in the pictures).

Section Three To the Finish: As I pressed to Pipeline I would make two critical decisions that would come back to haunt me but not hurt me later in the race. First, after I got through Twin lakes I threw away (literally by the side of the road) my arm warmers. It was too hot at around 80 degrees at elevation. I also made up my mind to ditch the wool undershirt when I reached Cynthia (neighbours in the campsite Scott was riding and Cynthia was manning a tent) and the crew at the Pipeline tent they had. I got through Pipeline and rode into a headwind over to Powerline. Powerline is where I know the time to finish the race. It is a one hour walk up Powerline and then two hours or less into the finish. I can almost predict it. I hit the base of Powerline at 8:20.

Still warm on the walk up Powerline but as we neared the top the storm clouds were moving in and the temperature was dropping like a rock. Checked on the Garmin and the temp was creeping down towards 50F (10C) and the rain was beginning to fall. I have ditched every bit of warm clothing I had and I am now dressed (finish line photos attest) in shorts and a short sleeve dress shirt. The descents at Leadville are great but this one would be 25 minutes of cold and wet with nothing to stop me from getting very very cold. The nice thing is the 5k uphill on the back end of Columbine will keep me warm. This is a steady 5% grade climb and time to just bury in the pain and climb as fast as you can.

I got to the top and the aid station and I know that the descent and run into town will kill me without some warm clothing. I asked if they had a spare garbage bag at the aid station, topped out with water and a couple quick gels. Yes, they did. Two volunteers (the volunteers here at this race are angels really) helped me poke a head hole in a clear garbage bag and then two arm holes. Now I was ready for the descent. This is again another 20 minutes down and I am sounding like a bad plastic bag whapping in the wind all the way down and most of the way to the finish (I would remove the bag before I cross the finish line). Intriguingly Katy Perry came on on the descent singing; ‘do you ever feel like a plastic bag?’ Well as a matter of fact, I do right now…

At the bottom I hammered towards the end. I can taste the finish at this point. The legs are strong. I am having to endure a few inquisitive looks from fellow racers and supporters as I stream by dressed in a plastic bag. As you know I would finish in 11 hours 20 minutes. Buckle number four is done. Even the announcer comments on my clothing choices as I crossed the finish line on the video below. 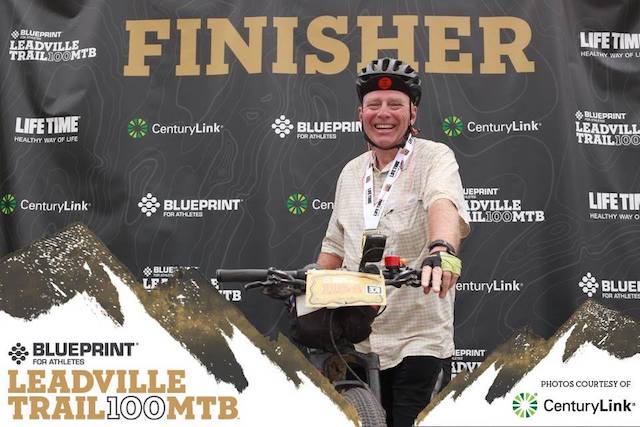 Closing Thoughts: The ride home was a food fest for me catching up on race day starvation (it feels like that after). I am now home and not sure what the future holds at this point for bike touring. I am kind of hooked now. I’ll follow up more on that in the next post. Nothing in the works now but many dreams.

Discover the art of traveling anywhere you want